Some thoughts on the exclusive dies...

It may be just me but I don't like when the exclusive & QK regular dies are
so much alike...the spider web looks just like QK's release from last
fall....this one just has more lines in it.....don't get me wrong I love the
exclusives & may most of them but I like for them to be different from other
releases...Anne

I do agree with you Anne. I felt that way when Quickutz released the pirate ship. I felt bad because the store spent a lot of money and time to create the Pirate ship for them to put one out right afterwards. But luckily those two dies are different sizes and can be used to make a layout look like it has depth. The Quickutz spider web is very straight lined. Normal spider webs are not that perfect and a lot people want more realistic dies. I just think it gives more people options. The castle die. ScrapHappy Ohio released a fairy tale type castle. Just recently Quickutz released more block style castle. I admit I have both. I noticed someone on the Quickutz board combined the two and it was cute. Then I combined the two with a little extra set of die cuts. And man it is pretty close to the Cinderella Castle at Disney. 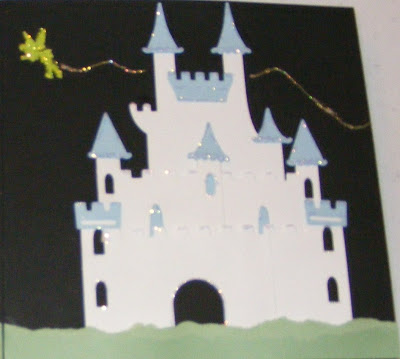 I know it is blurry. Sorry. I was too lazy to walk to the car to get the tripod.
I like that there so much variety. I hate that some of the exclusive releases are so many dies at once. I wish they would break it up so it is not has shocking to the pocketbook.
Posted by Krissynae at 7:30 PM

This castle is a great likeness to the castle at WDW (where I'm going next month!).

Krissynae
I am a 34 y/o single woman looking for Mr. Right (if he is out there). I am the proud mommy to 2 Dalmatians. My babies. I am a HUGE Disney fan and that is one of the great things about living close to His Kingdom. In the summer of 2006 I went to England and fell in Love with the country. Well I went back to England and decided I needed to add Scotland to the trip. What a great place.

Drop me a line or two. Let me know what you think or send me a little hint.